Home / Blog / Food and Drink / Eating Meat: A Primer for the Meat Challenged 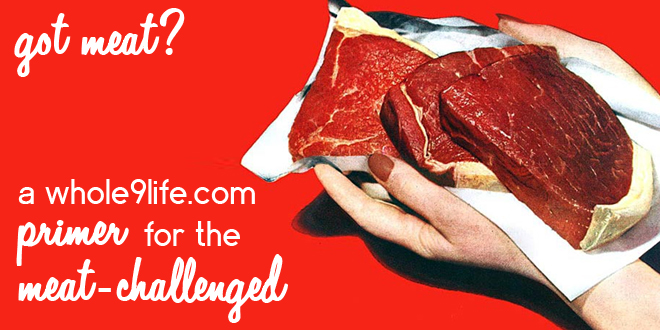 Eating Meat: A Primer for the Meat Challenged

We believe that eating dense animal protein sources makes you healthier, and that there are some serious drawbacks to conventional vegetarian protein sources.  But eating meat isn’t always an easy assignment – there are a number of reasons you may have trouble eating meat at every meal. Some have ethical concerns about the way our animals are raised, fed, treated and slaughtered; others have taste or texture issues with certain foods that make meat in any form hard to swallow; and many are former vegetarians who want to reintroduce meat into their diets, but don’t know where to start.

But it’s not easy to be meat-challenged in the Paleo world, where bacon is revered and meat-eating is practically its own sport. Sometimes, it’s hard for folks to ‘fess up to the fact that they have a hard time eating the stuff. Regardless of your particular difficulty with eating meat, there are some steps you can take to make the reintroduction (or continued consumption) of meat easier and more enjoyable. So for those of you who are meat challenged, or vegetarians looking to dabble on the meat-side, use these tips and tricks to make your protein requirements that much easier to stomach.

This topic is one with which we both have personal experience.  Dallas was raised vegetarian, and didn’t start eating meat until he was 20 years old.  Melissa was a semi-vegetarian for a long time, eating only fish and eggs from her late teens until her mid-twenties.  Dallas didn’t have a hard time introducing meat into his diet, but Melissa’s transition was slower.  She has texture issues with food, and the idea of eating flesh was hard to stomach (pun intended).  As her training changed – particularly when she started picking up heavy stuff – her tastes began to change. She began craving red meat, and had to figure out a way to increase the amount of protein in her diet in a way that didn’t make her dread every meal and snack.  We decided to compile our recommendations here as a free resource for those struggling with the same issues.

For those of you who are willing to eat meat, but have ethical concerns around choosing animal protein sources, we understand.  It’s the whole reason we began our Conscientious Omnivore series, dedicated to helping you make animal protein choices that you can feel good about.

For those of you with taste or texture issues, or who have a hard time with the general idea of eating flesh, here are some ideas to help you make the meat you’re eating more palatable.

Some vegetarians, like Dallas, just dive right into eating meat with no mental or physical trouble. However, if you have some concerns about reintroducing meat back into your diet (or the idea still makes you a little squeamish), all of the above recommendations still apply. In addition, you might want to consider a few additional tips to make your re-entry into animal protein sources that much easier.

Some people don’t like kale, others don’t like coconut (poor souls)… but just as many of us have a hard time getting our protein on. Don’t let the idea of eating meat distress you – and don’t let the fanatic bacon-pushers get you down. Figure out what works for you, and if that doesn’t include red meat, raw fish or bone marrow just yet, that’s okay. We bet that, using our tips and tricks, you may find yourself actually enjoying your protein more in the coming weeks – and feeling all the better for it.

Got your own meat-eating success story or recommendation? Share it in comments.