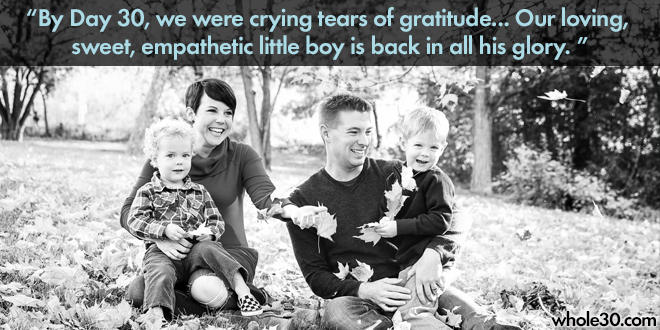 This testimonial from the Miller Family brought tears to our eyes. It’s not hard to imagine the frustration, fear, and pain the Millers felt knowing their 4-year-old son was in pain and struggling, but not knowing what they could do to help him. They graciously agreed to share their story in the hopes that their story will inspire others to try the Whole30 as a family, and see if changing the food you put on your child’s plate can change their lives (and yours) in miraculous ways.

My 4-year-old son had suffered from chronic diarrhea his entire life. He was always on the low end of the weight and growth charts. He has also been a restless sleeper, and often waking up screaming in the middle of the night for reasons we couldn’t figure out.

During the day, he suffered from raging, uncontrollable temper tantrums that seemed to get worse the older he got. They were so awful my son would start hitting and kicking himself and anything in his path. We’d have to move him to his bed in order for him (and all of us) to be safe. These would happen a couple times a day and would last up to an hour or more. Our whole family would walk on eggshells waiting for the next outburst to happen. It was unpredictable and miserable.

I was Googling everything from ‘sensory processing disorders’ to ‘autism’ to ‘symptoms of bipolar in children.’ My husband and I were worried—terribly worried. Every doctor told us that he would grow out of the screaming temper tantrums, but as he was approaching age 5, we observed the behavior was getting worse, not better. By the end of December 2014, we were at our wit’s end. We took our son to the pediatrician and explained again, in detail, the raging temper tantrums—how often they were happening, how impossible it was to calm him down, how abnormal the behavior seemed to be, how unlike him it was.

Then something miraculous happened. My son’s pediatrician recommended the Whole30. (Well, he gave me a note with www.whole30.com and the number for an occupational therapist who works with kids with sensory processing disorders. You can bet I left praying that we’d only need #1.)  I had never heard of the Whole30, but we were at the end of our rope and needed to try something different. We decided we’d do it together as a family on December 27, 2014. 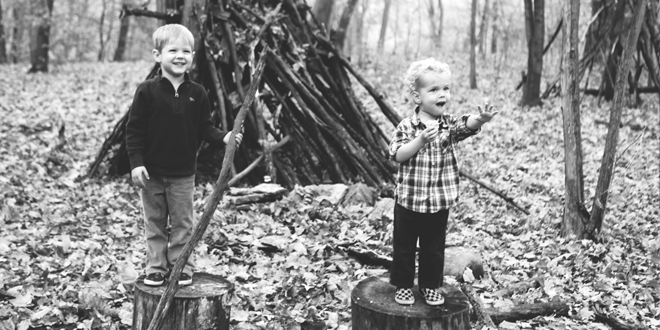 After just 3 days of removing non-compatible foods from our son’s diet, his behavior stopped. Stopped. By Day 7 we had a completely different kid. On Day 9 I canceled the appointment with the Occupational Therapist I had set up before we started the Whole30.

Our loving, sweet, empathetic little boy is back in all his glory. I always suspected it was a hidden food intolerance and not a behavioral problem, but we could never pinpoint what it was. Now we know that for sure. We cannot thank you enough.

The Whole30 was exactly what he (and we, as a family) needed. It has changed our lives and our family for the better. I can’t explain to you how different our day-to-day life is now. When my son eats foods that are Whole30 compatible he is a completely different child. As in, completely different. The best part is his digestion and bowel movements are now normal for the first time ever in his life. Not only does he act better, he feels better. It is obvious from his head down to his toes. He is less fussy, irritable, moody and he is sleeping soundly all night long for the first time in 5 years. And, best yet, he is fun to be around!

Our 2-year-old son has had a positive response to the Whole30 too; his digestion is now normal, and he is finally gaining weight too. I was terrified to attempt the whole30 with the kids, but it has seriously been the best thing ever for our family. Both our boys went from eating few veggies to now begging for veggies. Incredible. 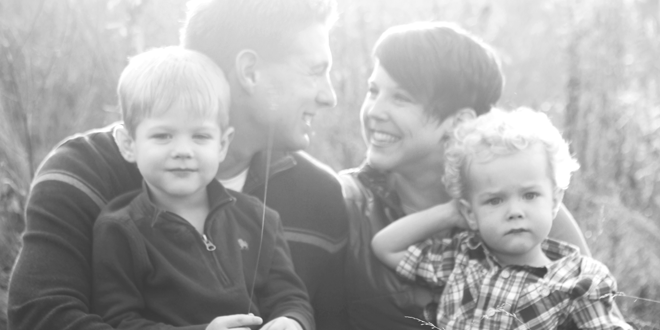 I hope our story helps other families know it is possible to do a whole family Whole30! It’s intimidating at first, but we are living proof it can be done. In fact, we love it so much that all four of us are moving  straight into a Whole60… which will probably turn into a Whole90 or a Whole180! Best yet, our son was the one who suggested we keep eating “the healthy way” because his “tummy likes it better!” Even he understands the direct correlation between what he eats and how his body feels.

It’s wonderful our boys get to learn this at such a young age. We are so grateful for your program and your commitment to health and wellness. Thank you, again, for everything you do to help change the health of individuals and families. We are Whole30 supporters for life!