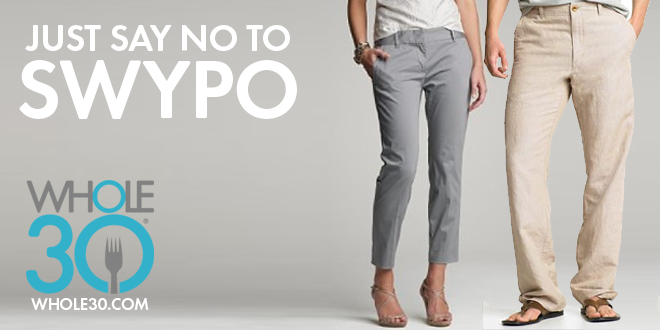 Since the creation of our Whole30 program in April 2009, we’ve cautioned against the Paleo-ification of poor food choices. In fact, this concept has been one of the cornerstones of the program, specifically requiring the elimination of Paleo brownies, pizza and pancakes for the duration of your Whole30. […]

From Whole30 Co-Founder Melissa Urban: Since the creation of the Whole30 program in April 2009, I’ve railed against the recreation of breads, muffins, cakes, and cookies using Whole30 ingredients.  In fact, this concept has been one of the cornerstones of the program, specifically requiring the elimination of “Paleo” or “grain-free” baked goods and treats* for the duration of your Whole30.

On occasion, my position that Paleo-ified junk food is still junk food has made me unpopular.  However, I know from experience that one of the fastest ways to negate the potential benefits of your Whole30 experience is to try to shove your old, unhealthy diet into a shiny new Whole30 mold.  And when it comes to the psychological hold certain foods have over us, the whole (pancake) is far more than just the sum of the parts (ingredients). So today, I’ll share my thoughts on why you shouldn’t try to recreate pancakes, bread, cookies, and ice cream with “approved” ingredients during your Whole30.

The analogy I chose to describe this phenomenon (mid-seminar in 2010 in front of 100 people), was sex. And for better or for worse, it stuck.

Let’s take grain-free pizza as one example.  Generally made with an almond flour crust and lacking any sort of cheese, this is one way bread and dairy-avoiding folk can enjoy the concept without the bellyache.  But here’s the issue. Have you had Paleo pizza?  Some recipes are pretty good, but is it the pizza you know and love?

I want you to think about the best pizza you’ve ever had in your whole life.  Picture the crust, light and crispy on the outside, chewy on the inside.  Imagine heaps of cheese, just waiting to be stretched and gathered in as you take your first bite. Imagine the smell of it, the feel of a warm slice in your hand, that first. Amazing. Bite.

That Paleo pizza may be pretty good, but be honest – it in no way compares to the best pizza you’ve ever had.  And herein lies the problem.  To use a rather risqué analogy, the Paleo-ification of poor food choices is a little bit like having sex with your pants on.

Given the confines of the Whole30 rules, you can’t eat pizza. There’s no gluten-laden crust, there’s no sugary tomato sauce, and there’s certainly no fresh mozzarella. So, you settle for Paleo pizza–grain-free crust, and a slather of almond-based “cheese.” I make the case that your Paleo pizza is like having sex with your pants on. It’s fine… but it’s not that good. You can tell yourself it’s okay, it’s still pretty good, it’ll do… but that’s a lie. Because you know exactly how good pants-less sex feels.

And if you continue your Whole30 program eating Paleo pizza, Paleo ice cream and Paleo pancakes, well… all it makes you think about is how less-than-stellar this version is, and how delicious the other version would be.  Just like… well, you know.

The problem is, if you continue to have sex with your pants on, it’s inevitable that at some point you’re gonna want to take your pants off.  And during your Whole30, that spells trouble.

Create A New You

Do you really want to spend the entirety of your Whole30 obsessed with all the stuff you can’t have, and eating the same foods you’ve been eating all along? I sure don’t want that for you! Remember, these are the same foods that made you feel so out of control in the first place. If you come out of your program with the same habits, patterns, and food choices you had when you started, what are your chances for long-term, life-changing success?

This isn’t the same as substituting an off-plan food with a Whole30 option. We have Whole30-compatible mayo, zucchini “noodles,” and nutpods coffee creamers, after all. To help you critically evaluate whether you’re attempting to engage in The Pancake Rule, ask yourself this question.  Am I trying to exactly duplicate or recreate the taste, texture, or flavor a junk food or treat with “approved” ingredients, or am I merely looking for a healthier, more nutritious substitution for that food?

In the case of desserts, it’s a straight swap. You’re desperately trying to duplicate the sweet treats you know and love in a way that’s still technically compatible. But if you’re looking for a sandwich substitute and you decide to use a lettuce leaf or a slice of roasted sweet potato, that’s a different story. Spaghetti squash for pasta, a portobello mushroom cap for a burger bun, or egg and spinach “muffins” for traditional muffins are all examples of perfectly healthy and appropriate substitutions during your Whole30.  (Another tip:  If you’re subbing something off-plan with 100% vegetables or high-quality meat, that’s almost certainly a thumbs-up.)

In addition, context matters.  For example,”fried” chicken (pan-fried, using almond flour or tapioca starch as a coating) is a perfectly appropriate dinner choice while on your Whole30. However, if you’re coming off a wicked addiction to KFC, perhaps this recreation isn’t the best choice for you during your program. Make sense?

Another way to look at it: Ask yourself, when I have a hard day, feel anxious or lonely, or need comfort, is THIS a food I’d turn to? Is this food something that’s hard to stop eating once I start? Is this a food that makes me feel out of control with my habits? Nobody comes home after a tough day and throws themselves into a jar of mayo or munches on white rice during late-night TV-watching, so making a Whole30-compatible version is A-OK. But bread, cookies, or coconut milk “ice cream?” That’s another story.

The rules are clear: No sex with your pants on during the Whole30. Think critically about whether the food choices you are making during your Whole30 fit the spirit and intention of the program, not just the technicality of the rules. Learn what to serve the kids on Friday night instead of pizza.  Boost your nutrition by eating a fresh veggie scramble with eggs for breakfast instead of pancakes. And during your Whole30, don’t fool yourself into thinking that those grain-free cookies are holistically healthier for you than the store-bought brand you used to eat.

Use the Whole30 to change your habits, change your patterns, break unhealthy cravings and create a new, healthy relationship with food.  You won’t be sorry, as those new habits and patterns will stay with you for the rest of your life. And use what you’ve learned to have whatever kind of sex you want in your Food Freedom, because at that point in the game, pants are optional.

*Off-limits foods that fall under this rule include: pancakes, waffles, bread, tortillas, biscuits, muffins, cupcakes, cookies, brownies, pizza crust, alternative flour pastas, cereal, or ice cream. No commercially-prepared chips (potato, tortilla, plantain, etc.) or French fries either. And “but I don’t have a problem with (fill in food) doesn’t matter here; the rule is a rule, and it’s only 30 days. However, this list is not limited strictly to these items—there may be other foods that you find are not psychologically healthy for your Whole30. Use your best judgment with those foods that aren’t on this list, but that you suspect are not helping you change your habits or break those cravings. Our mantra: When in doubt, leave it out.