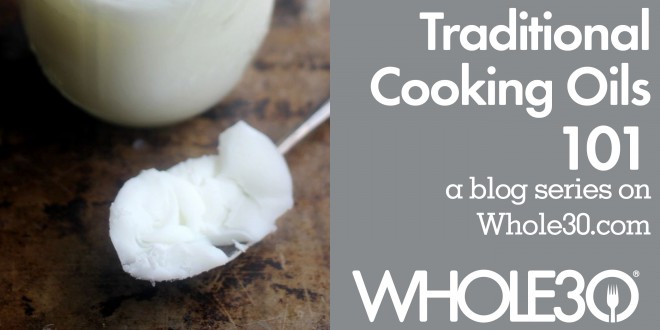 When we asked our community to submit questions about animal oils for a project we’re working on with Whole30 Approved partner Fatworks, we were surprised to find that many people replied that after years of hearing the message “fat is bad,” they’re still afraid to add fat—especially saturated fat from animal oils—to their plate on a regular basis. We want to set your mind at ease about using these healthy fats as part of your healthy Whole30 diet.

A few months ago, we asked the Whole30 community to submit questions about animal oils for a project we’re working on with Whole30 Approved partner Fatworks. Surprisingly, many people replied that after years of hearing the message “fat is bad,” they’re still afraid to add fat—especially saturated fat from animal oils—to their plate on a regular basis.

Considering we’ve been talking about how saturated fat isn’t the devil for more than four years now (and so has Time Magazine, and NPR, and Harvard Medical School cardiologists…), we were surprised to hear this myth persisted.

Still, we want to set your mind at ease about using these natural, healthy fats as part of your healthy Whole30 diet, so that’s why we decided to start this four-part Traditional Cooking Oils 101 series all the way at the beginning, with a refresher course on saturated fat from our first book, It Starts With Food.

Lions and Tigers and Saturated Fats, Oh My!

If you read nothing else in this post, be sure to read this: When part of a balanced diet (including a variety of animals and plants), the saturated fats found in real food make you healthier. Saturated fat from high-quality, real-food sources is not evil incarnate—it’s just misunderstood. Here’s what you need to know: Saturated fat is not artery clogging.

You’ve seen the headlines, time after time: saturated fat causes heart attacks and strokes. But while the logic might seem sound (eating fat fills your arteries with fat), the facts don’t add up. In 2010, the Journal of Clinical Nutrition analyzed the results of 21 different nutritional studies that tracked the diets of a combined 347,000 participants. Their conclusion: “There is no significant evidence for concluding that dietary saturated fat is associated with an increased risk of coronary heart disease, stroke, or cardiovascular disease.”

Simply put, saturated fat and cholesterol do not cause heart disease or stroke. (The true culprit is systemic inflammation; see page 169 in It Starts With Food for a detailed explanation.) Saturated fat is a rich compliment to your diet when included alongside whole, unprocessed, nutrient-dense foods, as demonstrated in the Whole30 meal planning template.

One of the Good Guys

In fact, when eaten as part of a nutrient-dense diet and obtained from the highest-quality sources (think grass-fed, pastured, and organic), saturated fat actually makes you healthier. Check out this list, compiled by Dr. Michael R. Eades:

*Some people see increased total cholesterol when eating more saturated fat, but in the context of a whole-foods, nutrient-dense diet, this increase is often heart-protective.

Saturated Fats in Your Whole30 Kitchen

Your great-grandma knew what’s what… the low-down on Animal Oils, on the #Whole30 blog.

But your great-great grandma used equally healthy forms of saturated fat that subsequent generations have nearly forgotten: lard, tallow, schmaltz (chicken fat), and duck fat. When obtained from grass-fed, pastured, organically-raised animals, these traditional cooking oils are a fantastic source of saturated fat, and the most stable fats for cooking, even with high heat.

That’s why we’ve included Fatworks in our Whole30 Approved program. Their traditional cooking oils are the highest-quality, borne from their founder’s own desire to eat whole, nutrient-dense, real food.

Does that put your mind at ease? Still unsure about the best way to include traditional oils in your healthy, varied Whole30 diet? Continue the discussion on Facebook or Instagram, and stay tuned for upcoming installments of our Traditional Cooking Oils 101 series, where we answer your specific traditional oil cooking questions and share delicious recipes.

Header image courtesy of bakerbettie.com. This post was sponsored by Fatworks, which is great because Melissa Hartwig puts her Fatworks Chicken Schmaltz on just about everything. Except salmon. Because she tried that, and it was weird.