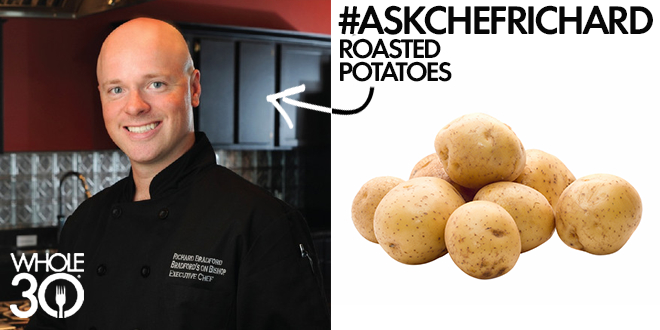 Today we’re rolling out our next video from Chef Richard Bradford, creator of the recipes in The Whole30 and owner of Whole30 Approved Pre-Made Paleo. (Missed our other #AskChefRichard videos/Q&As/recipes? Check them out here!)

Today, Chef Richard will be demonstrating roasting techniques for potatoes, as outlined on page 167 of The Whole30. And as a bonus, Chef Richard is also answering your potato FAQs and sharing a delicious Whole30-compatible recipe. (See below for how to submit your Whole30-related food, cooking, or grocery shopping question to Chef Richard!)

Roasted Potatoes, from The Whole30

Roasted Potatoes: the next installment in the #AskChefRichard #Whole30 video series.

All About Potatoes, with Chef Richard

Is there a way to prep raw potatoes in advance and keep them from turning brown?

The key to keeping cut potatoes from turning brown is to minimize their exposure to oxygen. I recommend chopping your potatoes, placing them in a bowl and covering with cold water or tossing them in cooking fat or a marinade. Cover the bowl with plastic wrap and place in the refrigerator until you use them.

I’m about to harvest a bunch of potatoes from my garden. Is there a way to keep them through winter?

One option is to blanch and then freeze them. Set a pot of water over high heat and bring it to a boil. Prepare a bowl of ice water and place on a counter top near the stove. Clean and peel the potatoes, boil them for 5 minutes, and then place them in the ice water bath until they are completely cooled. Remove from ice water, pat dry and place in freezer-safe Ziploc bags, squeezing as much air out of the bag as possible. Place in freezer until you are ready to use.

Another option is to store them with skin on in a cellar, or cold, dark space. See further ideas from Mother Earth News here.

Yukon and red potatoes are less starchy, have a wax-like consistency and thin skin. They are ideal for potato salads or in soups and stews. Starchier potatoes like Russets  have a fluffier consistency when cooked and are great served baked or mashed. 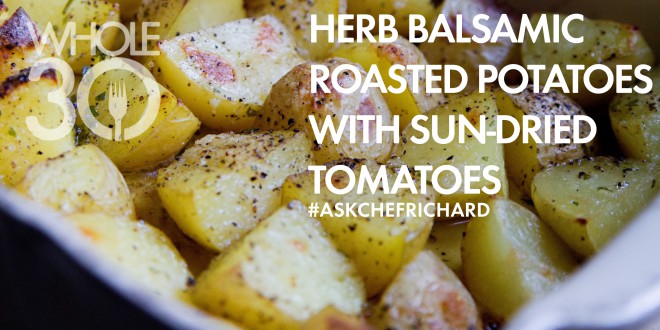 PREHEAT the oven to 425 degrees.

IN a mixing bowl, toss diced potatoes with ghee and balsamic vinegar.  Spread in an even layer on a cooking pan lined with parchment paper. Season with salt and pepper.  Roast in oven until golden brown for 35-45 minutes.

REMOVE from oven and let cool for 5-10 minutes. 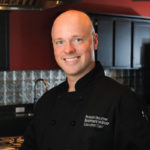 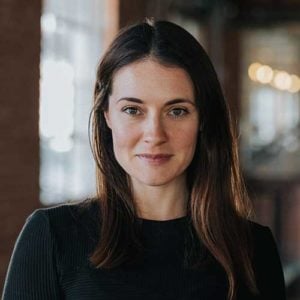