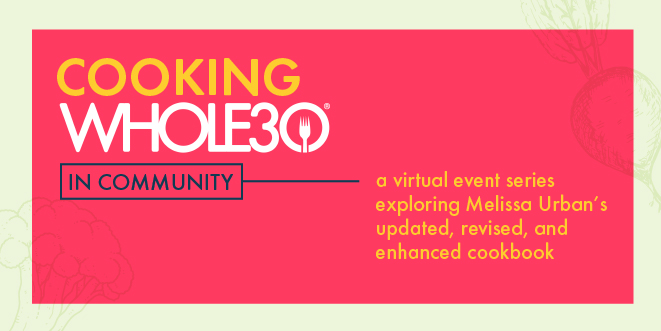 Missed this Whole30 Community Cares event? Catch up by watching the replay!

This year, Melissa Urban couldn’t do her normal book tour to celebrate the release of Cooking Whole30, the updated, expanded, and enhanced edition of The Whole30 Cookbook. So instead, we took her book tour virtual, hosting a series of free Whole30 Community Cares Events. Missed the events? No worries. You can watch the Cooking Whole30 Replays below. Enjoy!

On Wednesday, 1/13/2021, Josmine Evans moderated a discussion between Melissa, special editor Redwood Hill and Whole30 Director of People & Culture Dr. Carrie Kholi-Murchison. They discussed the process they used to revise Melissa’s 2016 book The Whole30 Cookbook, making it reflective of Whole30’s diversity, equity, and inclusion values, as well as our deep cultural appreciation of food and its historical pathways and ingredients.

During the editing process, they rewrote recipe titles and headnotes; tackled the biggest revision of the the “What is Whole30” language with a complete rewriting of the “tough love” section; included a new forward co-authored by Melissa and Dr. Kholi; and included recipes from five new contributors. Watch the replay below to hear their entire discussion.

On Wednesday, 1/27, Melissa Urban moderated a conversation with the five recipe creatives that contributed brand new recipes to the Cooking Whole30 project. They discussed their work, sources of inspiration, and the stories behind the specific recipes they developed for this cookbook

During the event, each creative highlighted one of their favorite Whole30 recipes. We thought it would be fun to link to those here. Enjoy, and happy cooking!