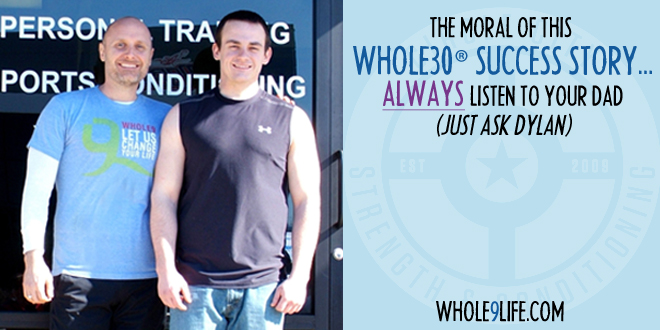 Recently we received an email from Whole9 Nutrition Partner Chris Roche of Circle City Strength and Conditioning in Brownsburg, IN about his oldest son, Dylan’s, experience with the Whole30.

Dylan, who struggled with depression and weight gain, has completely turned his life around in the past year, thanks to his Dad’s smart advice and the Whole30 program. Dylan, is now 22 and in college, has lost almost 90 pounds, is in the best shape of his life, has a clear head, and is loving life.  He credits his success to the Whole30 and to his Dad for sparking his interest in the program.

In Dylan’s Own Words

A little over a year ago at the age of 20 I hit what I like to call “critical mass”. My lifestyle and eating habits were so out of whack that I had reached an all-time high of weighing 280lbs. For me this was a huge shock when I stepped on that scale. How could I have let myself get this out of shape in just two years? In the middle of my senior year of high school I had been on the wrestling team, was down to 185lbs, running every day, lifting weights, and getting extreme amounts of exercise into my daily life. Now, just two years out of high school, I hadn’t run or done any sort of lifting in over a year. To be honest, I was ashamed of myself – not because I didn’t like what I saw in the mirror – but because I was no longer taking care of myself for no apparent reason.

That summer things changed dramatically for me. One night my dad told me that he and my step-mom were going to go start this new “lifestyle” called the Whole30. He asked if I would be interested in giving it a shot and it really didn’t take me long to reply with a huge “yes”! I was more than ready to get back into shape and live a healthy life again. I’m not going to lie, the first week was by far the hardest. I had to give up so many unhealthy food choices I had been making. I had to drop caffeine, mainly because I don’t care much for coffee or tea, and was heavily addicted to Red Bull and soda which resulted in monstrous headaches! I also didn’t realize how much I loved bread and how “addicted” to unhealthy foods I had become.

A few weeks into the Whole30 that all passed, and before I knew it I was feeling the best I had felt in years. I could finally go to sleep when I was ready instead of fighting it throughout the night. My energy levels were coming back, and I felt much happier than before. At the end of the first 30 days I had lost 35lbs! I couldn’t believe it. It was a huge stepping stone, and being so strict with the program, the results were just amazing.

Since then, I’ve done the Whole30 four times, and throughout the last year have followed the Whole9 lifestyle very closely. Since beginning this program is I’ve finally started to incorporated workouts back into my life. This has been what I call “turbo charging” my weight loss and all around health. I am currently at 194 pounds, a total weight loss of 86 pounds, in just over a year! I now enjoy rock climbing, swimming, running, and working out in the gym.  I am happy I no longer have to say, “well back in high school I used to weigh blah blah, and do blah blah.” I’m now living it, and with the progress I continue to make, I don’t see any turning back. The worst part about all of this is that I need new clothes that fit me better. (Bummer right?)

I highly recommend anyone to give the Whole30 a shot as I’ve had nothing but positive results from doing all this. I will say, it’s not easy, but at the same time it’s really not that hard either. I’m thankful to my dad for introducing this into my life. Without him and the Whole30, who knows where I’d be today! 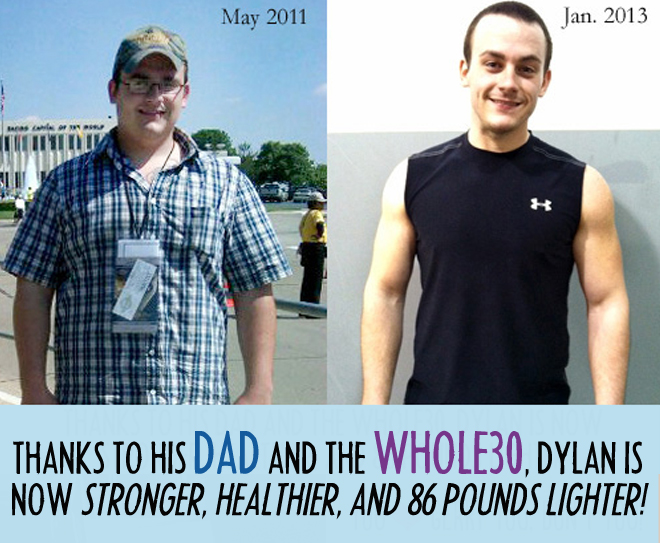