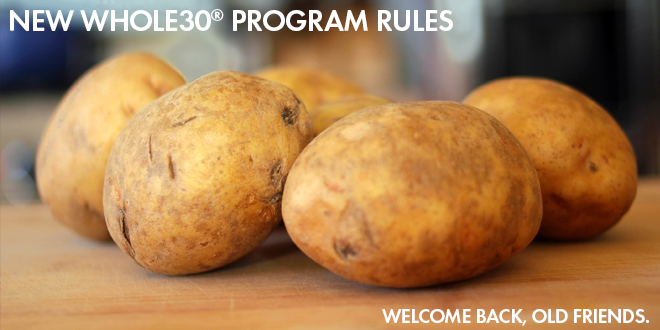 We have one big announcement today, in preparation for our site-wide Whole30 program starting August 1st (and pertinent to every Whole30 thereafter). We could give you the whole backstory, or we could just cut to the chase and tell you what’s what.

White potatoes are now allowed on the Whole30 program.

You should know by now we’re big fans of getting right to the point. (But for those of you who want some backstory, keep reading.)

We are always thinking about the Whole30 program—how to make it better, more effective, easier to follow, and more logical in its framework. The discussion of white potatoes began about a year ago amongst our team and valued advisors, and the debate raged hard and long. White potatoes are a whole, real, nutrient-dense food! It doesn’t make logical sense to leave them out while other carb-dense foods like taro, yuca, or sweet potato are allowed. On the other hand, do people really need more white potatoes in their lives? Many people come to the Whole30 metabolically challenged, overweight, and stuck in poor food habits. They don’t need more energy, and less incentive to try new vegetables or change their habits.

Plus, how do we handle the potato chip/french fry thing?

Eventually, we arrived at a consensus. Potatoes of all varieties are in, but fries and chips are not. (This should not be a surprise. Fries and chips are about as Whole30 as Paleo Pop-Tarts.) We’ve updated all of our Whole30 program rules on the site, and our official Can I Have…? guide with the new rules, and some guidelines about “fries” and “chips.”

Chips or Fries: Not if they’re commercially prepared or deep-fried

While we recognize that potatoes are a real food, we also know that eating them in the form of fries and chips has turned them from “produce” into an adulterated commercial “product.” It’s easy to find sweet potato, beet, or vegetable chips or restaurant fries that meet the Whole30 ingredient standards. It is not easy, however, to consume those fries or chips in a way that’s true to the spirit of the Whole30. It’s hard to find a suitable place for them in our meal planning template (no, half a bag of “Sweets and Beets” is not an appropriate way to fill your plate with vegetables), and even harder to stop yourself from eating them when the designated serving comes to an end. For most of us, chips and fries are a bonafide food-with-no-brakes, and fall into that deep, dark area of less-healthy foods with technically compatible ingredients. For that reason we do not allow commercially-prepared fries or chips, or deep-frying starchy veggies and turning them into fries or chips during your Whole30. (However, if you want to roast some kale until it’s crispy, or thinly slice jicama into a scoop for your guacamole, be our guest.)

We also made one small change that you’re probably already doing, respecting salt. We realized that all iodized table salt contains a form of sugar (dextrose). You smart Whole30’ers were asking, “Does this mean we have to avoid table salt?” That’s conscientious of you, but that would also be nearly impossible. Avoiding table salt means you’d never be able to dine out, eat pre-made food from a deli counter, or buy packaged food from the grocery store! So we’ve added salt as an exception to to the official rules—probably not an actual change for you, but we wanted to spell that out for the Type A overachievers.

First, salt makes your food delicious. Second, when you cut out processed and packaged foods, you remove the vast majority of sodium from your diet. Adding salt to your Whole30 plate won’t push you over reasonable sodium limits, and if you avoid salt altogether, you run the risk of an electrolyte imbalance (not to mention serious food boredom). We encourage a mix of iodized table salt and sea salt.

Tip: Did you know that all iodized table salt contains sugar? Sugar (often in the form of dextrose) is chemically essential to keep the potassium iodide from oxidizing and being lost. But remember, salt is an exception to the Whole30 “no added sugar” rules. Without this exception, you’d never be able to eat outside of your own home, because iodized table salt is added to all restaurant and pre-packaged foods.

Get Ready for Your Whole30

So there you have it—two official changes to our Whole30 program. The next site-wide Whole30 program starts August 1st! We’ll have even more resources available for you between now and then (look for new Whole30 recipes using potatoes from your favorite Paleo recipe bloggers and cookbook authors!), and plenty of reminders about the new Whole30 rules across Facebook, Twitter, and Instagram.

So get ready, get set, Whole30! We can’t wait to see the changes you’re about to experience during the month of August.

What do you think about the new Whole30 rules?  Sound off in comments!