Home / Blog / Mindset / You Get What You Pay For: A Post-Whole30 Perspective 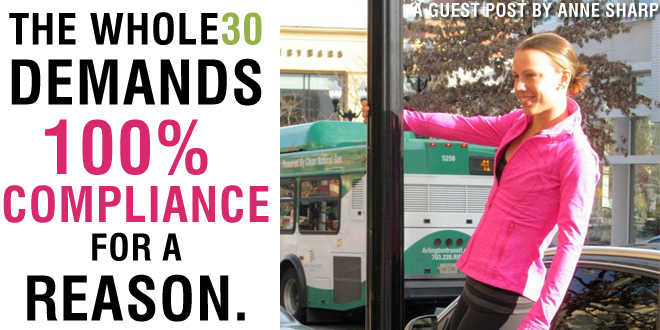 You Get What You Pay For: A Post-Whole30 Perspective

Today, we’re looking back to a special guest post from Anne Sharp, member of CrossFit South Arlington. The lessons she learned during her two Whole30 experiences are just as relevant to those of you “in the process” as they were two years ago.  So read on, and pay attention, because you really do get what you pay for.

In Anne’s Own Words…

“For those of you about to embark upon a Whole30, I have one morsel of tried-and-true wisdom for you: half-a**ed participation will yield—at best—half-a**ed results.

Allow me to elaborate.

The Whole30, Take One

Sometime last winter, a handful of us decided to hop on the paleo bandwagon for a 30-day ride. I felt destined for greatness—a slew of PRs, a rockin’ bod, and a general radiance that would commence the moment I leapt out of bed ready to win the day. I wasn’t even starting from scratch—most of my meals were cooked at home and weekly trips to the farmers market were like a visit to the candy store.

That said, I had a few cards stacked against me—notably a pastry-oriented lifestyle and a desperate aversion to being “that girl.” You know, the one who’s a pain to take out to dinner because she doesn’t eat/drink like a normal human.

So, like any competition-driven individual, I did the logical thing: I gamed the system, stretching the limits of what is “paleo” to ensure I was rarely uncomfortable.  I took the path of least resistance, replacing sweets with Larabars or dried fruit and making the assumption that wine, merely a fermented form of grapes, was totally legit. I avoided awkward interactions with restaurant staff and relatives, obediently eating the questionable dressing offered on my salad rather than asking for olive oil and vinegar—I mean, DRESSING?? We’re talking a tablespoon of sugar here. And everyone already thinks I’m preggers because I asked for club soda.

A few weeks in, I can’t say I really felt much different from before. But rather than seek out flaws in my strategy—I was, after all, 99% compatible and just a little fruit-heavy—I assumed it suggested that I had already achieved near-optimal functionality with my diet.

Shortly after the end of this challenge, I began reintroducing non-paleo foods to prepare for hiking the Appalachian Trail.  All the nuts and jerky in the world wouldn’t make paleo feasible for a 2,000 mile thru-hike, so I figured I’d best get my system acclimated to Snickers bars and Little Debbie cakes. The transition was fairly seamless—no real change in how I felt.

The detectives among you will realize this is a major tip-off to the half-a**edness of my participation in the first Whole30 challenge.

Fast forward, September 2011. We successfully completed the trail, but five months of couscous and candy bars had caught up with me (despite 15+ miles per day of hiking). I was an emotional hazmat and literally felt puffy—my clothes fit all wrong. I knew a dietary intervention was in order.

Luckily, meat and vegetables were precisely what I craved the most. Show me another cellophane-wrapped breakfast pastry and I’d probably have smushed it in your face. I also had a good monetary incentive this time: after six months sans income, I didn’t have a lot of cash to spend willy-nilly but I was feeling very materialistic—my cravings for steak were only matched by my cravings for new lotions, potions, and goodies to make me feel civilized.

Without a CFSA challenge to piggyback on, I embarked on my own: six weeks of strict Whole30 (NO HALF-A**ING).

The difference across the two challenges was enormous.

Although I was starting from a post-trail nutritional low point, this was a whole new world compared to the first challenge. The puff disappeared quickly and my mood became irrepressibly positive. My energy was boundless—I really did wake up ready to rock and could sustain that energy for whatever the day threw at me.  A few berries or an apple could sate my initial craving for sweet things and ultimately, I found myself much more enthusiastic about roasted cauliflower. I ran faster and recovered easily from rigorous workouts. As an unexpected bonus, my nails grew so fast and so strong that I just HAD to get a fancy manicure to celebrate.

I also learned a few lessons about navigating one’s social life in the midst of the challenge.

I’m currently in the post-challenge “testing phase” and find that the further I stray from paleo, the funnier I feel—groggy, stomach-rumbly, less on the ball. Except, of course, with regard to moderate consumption of wine and chocolate. They bring nothing but happiness to me.”

As we say in our Whole30 program, we don’t demand 100% compliance because we’re playing the tough guy, or trying to be the most toughest nutrition program out there.  We demand 100% compliance because that’s what the program demands, based on the science of an elimination protocol. Why waste 30 days giving up foods you think you love, only to learn nothing from the experience?  As Anne demonstrated, you get out of the Whole30 what you put into it, but it’s not proportional.  She learned the hard way that a 99% effort gleans far less than a 99% improvement in results – and that extra 1% (or 10%, or wherever you’re coming from) makes 100% of the difference.

Thanks to Siddharth Sawkar and Anne Sharp for sharing their story with us! You can read more of Anne’s smart ramblings on her blog, Real Pretty Food.