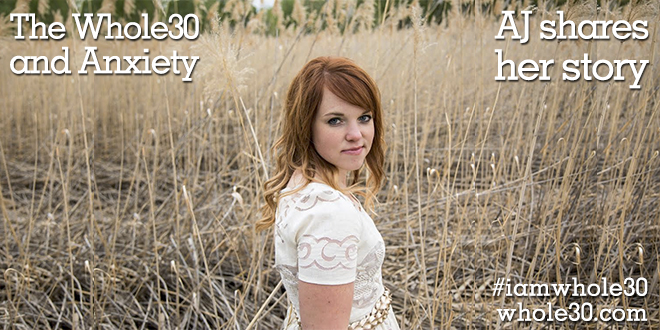 We found AJ’s story on Instagram while browsing the #Whole30 hashtag. She wrote, “When I started the Whole30, I honestly was mostly looking for a way to lose a few pounds/inches before my wedding this summer. After reading It Starts With Food, I realized it is about so much more than that, so I started over after a week with a different focus. I’ve posted about a few of the benefits of the Whole30 in my life the past 28 days, but I haven’t mentioned the most significant transformation, and I decided I want to share something I rarely talk about.”

The physical benefits of the Whole30 can be astonishing, but the emotional and psychological benefits are just as significant. Mental health conditions like depression and anxiety are often scary to discuss with friends and family, never mind the entire world (via the internet), but AJ has been brave enough to share her anxiety history and Whole30 experience here so others can be inspired, find support, and be hopeful that there is a way to take your life back.

In AJ’s Own Words

I feel like I can’t quite describe how much the Whole30 has changed my life, but it is by far the best thing I have ever done for my physical, mental, and emotional health.

I heard about the Whole30 in early 2014 from some friends’ social media posts. I was impressed with the “after” pictures I saw—slimmer stomachs and happy glowing faces. So I set out on the journey, hoping to slim down a bit before my summer wedding. After reading It Starts with Food, I realized it is about so much more than that. I got really excited because I knew that I had some issues with eating (binging, feeling guilt, going on and off diets every week, cravings, etc.) that I hoped it would help. 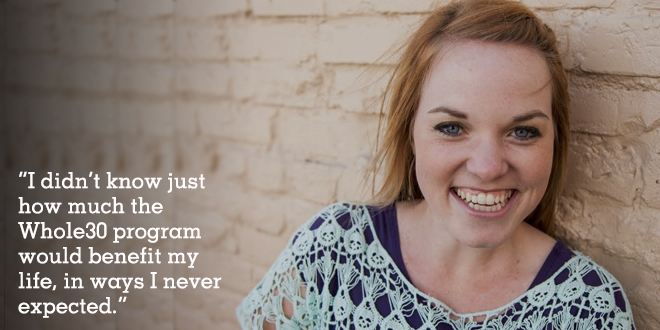 Rewind back to five years ago. I was 21 years old and married to an addict who was abusive in several ways. As a result, I developed some serious issues with anxiety. After a while, I started going to therapy. I left the relationship, and shortly later found out I was pregnant. My anxiety was difficult to handle in this crazy time of life, but slowly I learned healthy ways to cope with it and it became manageable. I found peace in my new life and settled into my routine as a single working mom.

However, over the past year and a half, my anxiety has gradually gotten worse, despite my every effort to cope with it in healthy ways that had worked in the past. From January to March of 2014 it was at its worst point. I was having breakdowns nearly every day, and constant anxiety about almost every aspect of my life. I slept horribly, I ate horribly.

Anyone who has dealt with anxiety knows how debilitating it is, and difficult to keep living life. I tried so hard to keep my anxiousness hidden because I felt like others would judge me and I hated admitting something was “wrong” with me. I had periods of mild depression, which really scared me. I am a religious person, and I had been praying to find some way to ease this stress. 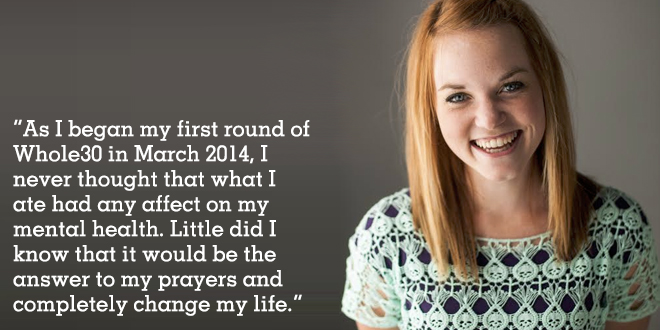 I started the 30 days, with week one being the hardest. I couldn’t turn to my “comfort foods” or drown my stress in Dr. Pepper. But after that first week, things took a sharp turn for the better, and about week three my fiancé commented that I hadn’t had a breakdown for a long time, and seemed much happier and calmer. I realized at that point that my anxiety had been basically non-existent for the last few weeks! This was in April when I had grad school finals, was planning a wedding, and finishing up the school year. Normally I would have been a basket case! However, I was calm! I was actually sleeping well, and I hadn’t had a single breakdown since day 7. I still felt stress—that’s just part of life—but it was a manageable and realistic stress, not the constant excessive worrying I had before. 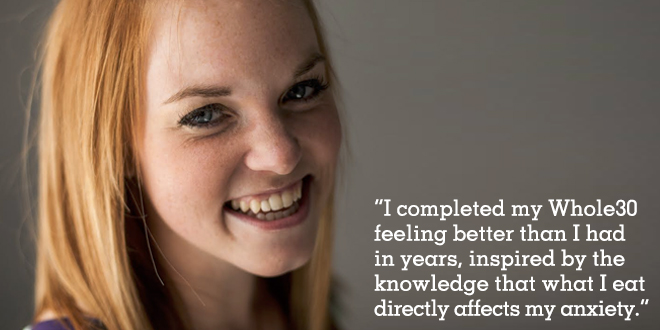 I did see some physical changes from doing Whole30, but the mental changes far surpass those. No before and after pictures can truly capture the change for good in my life. Some of the other benefits for me have been: developing cooking skills and a love for it, clearer skin, loving myself and my body more, improved eating habits for my daughter, and an awareness of myself and my emotions.

To sum it up, the Whole30 has been the best thing I have ever done for my overall health. I have continued eating real, whole foods for the past two months since finishing that first round. Through some reintroduction I have discovered specifically what triggers my anxiety, and I know to eliminate those foods from my life. I have been so excited about the positive changes in my life that I have shared my experience with others. Several people have expressed to me how Whole30 and clean eating has helped their mental health as well. I am so grateful for the empowerment I feel. It really does start with food!