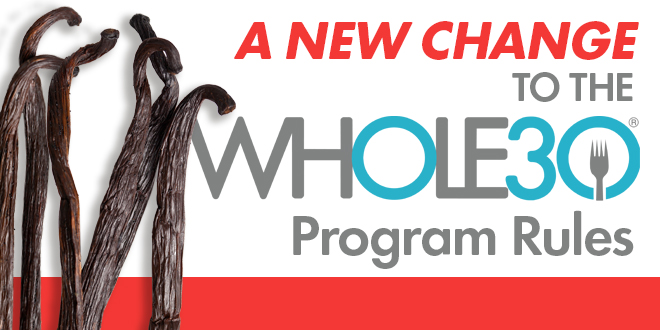 Going forward, botanical extracts (such as vanilla extract, lemon extract, or lavender extract) will be allowed on the program, even if the ingredients contain alcohol.

We don’t change the Whole30 rules often. However, occasionally when new research comes out or we gain a better understanding of how certain ingredients are made (see: coconut aminos, April 2017), we revisit the “why” behind our rules, and make changes where needed.

This is one such moment for a small but meaningful change. Going forward, botanical extracts (such as vanilla extract, lemon extract, or lavender extract) will be allowed on the program, even if the ingredients contain alcohol.

The “no alcohol” rule has always had its exceptions, in the form of wine-based vinegars. The subject of alcohol-based extracts and their role in the program came up during a discussion with one of our partners, SOUND Tea, during their new product formulation. After extensive research, here’s what we’ve discovered about extracts.

An extract’s flavor and aroma is derived primarily from one single source. Furthermore, an organic extract is made of at least 95% organic ingredients. The remaining 5% (or less) is made up from ingredients from nature that are still organic-compatible. Organic extracts are often solely the plant’s extractives and organic alcohol, but if they do contain anything else added, it will either be organic or organic-compatible.  In other words, if you see “organic blueberry extract” on a product’s ingredient list, you know that the flavor source is truly either completely or primarily from organic blueberries, and any other ingredients follow the organic guidelines.

Certified organic extracts are held to the highest quality standards for all “flavorings,” and as such, labeling is more comprehensive and transparent. As for the alcohol in these extracts, it is always distilled (thereby rendering it gluten-free, regardless of the starting material). And while extracts generally contain a high percentage of alcohol (vanilla extract is 35% or more, for example), all botanical extracts sold on the market have been deemed “non-potable,” meaning you’re definitely not drinking them.

The point of elimination on the Whole30 is to avoid foods or drinks that have been shown to have a potentially negative impact on your cravings, hormonal balance or blood sugar regulation, digestion, and immune system. Given the new understanding we have now of how botanical extracts are derived and labeled, I simply don’t have concerns. And as we don’t eliminate things just for the same of leaving them out… a rule change.

Whole30 Compatible Extracts: An Exception to the Whole30 rules

The exception to the Rules section, per our website and handouts, will now read:

Vinegar and botanical extracts. Most vinegar (including white, red wine, balsamic, apple cider, and rice) and alcohol-based botanical extracts (like vanilla, lemon, or lavender) are allowed during your Whole30 program. (Just not malt-based vinegar or extracts, which will be clearly labeled as such, as they are presumed to contain gluten.)

An Aside from Melissa

In our research, we discovered many Whole30 Approved partners are moving towards using extracts in the interest of transparency and sourcing organic ingredients. They’re being used to preserve products and meat (like rosemary extract) and to flavor beverages like SOUND Tea. Plus, yeast extract is popping up in lots of foods from partners like Primal Kitchen, Teton Waters Ranch, Kettle & Fire, and Safe Catch.

To be honest, vanilla extract being off-limits for the program is one of the technicalities that I always thought was kind of dumb. However, it’s HARD to make one set of rules that is both maximally effective for millions of people, and super-easy to follow. Adding dozens of exceptions to the rules isn’t helping our second goal, but in the case of botanical extracts, it’s the right thing to do.

I’m happy about this change, and thought it may not affect your next Whole30 much (if at all), thank you for your support of our program as we continue to learn and grow. May we never be so close-minded as to ignore new information for the fear of having to say, “We got this one wrong.”