Home / Blog / Diet and Nutrition / A Change to the Whole30 Rules: Peas are Compatible 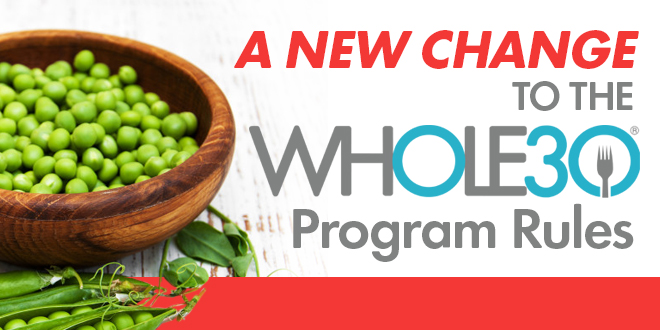 A Change to the Whole30 Rules: Peas are Compatible

We’re adding an exception for peas, which means that sugar snap peas, snow peas, green peas, yellow peas, and split peas are allowed during your Whole30.

I’m always looking at the Whole30 program rules against the latest science, and our ever-growing body of clinical evidence from people completing the program. The Whole30 rules were first proposed in writing in July 2009. Since then, they haven’t changed significantly, because the bones of the program are still soundly supported by both science and clinical experience.

However, we occasionally reevaluate specific foods or food categories based on new information. We brought white potatoes into the program in 2014, ruled out store-bought chips in 2017, and recently made an exception for alcohol-based fruit and botanical extracts.

Changing the rules is a BIG deal, but it’s important for me to be willing to reevaluate. The research is always evolving, and if we can allow things back into the program while still giving you the same life-changing results, I’m all for it.

Today, I’m happy to report, you’re getting something back IN! Sadly, it’s not red wine or cheese—we still have more than enough evidence to support the elimination of alcohol and most forms of dairy for our program. No, today’s change to the Whole30 Rules is… peas.

Not quite as exciting as cheese.

Along with a group of MD and RD advisors, I’ve been looking at the “no legumes” rule. Legumes (minus soy and peanuts) tend to be the least problematic of the foods we eliminate on the Whole30, which is why they’re listed first in our reintroduction schedule. While many Whole30’ers still report digestive distress and other issues upon reintroduction, they tend to be less impactful than, say, gluten grains or dairy, especially if soaked before cooking. Eliminating for a short 30 days, then reintroducing carefully is still the most effective way of knowing how different kinds of legumes work for you. (And if they do work, keep eating them! That’s your Food Freedom.)

This brings me to peas. While botanically a legume, over the years I have rarely seen peas present problems upon reintroduction. (Honestly, I can’t think of a single anecdote, although I know statistically peas can’t work for 100% of people.) Most varieties of peas are lower in FODMAPs and phytates than other forms of legumes, and pea protein is considered a hypoallergenic protein source by functional medicine doctors. PLUS, sugar snap and snow peas (along with green beans) have been an exception to the no legume rule since the beginning.

Based on this re-evaluation, we’re bringing all varieties of green, yellow, and split peas back into the Whole30 program. As of now, the exception to the official Whole30 Program Rules will state:

Included in this decision was an advisory group made up of MDs, an RD, and functional medicine doctors who are current on both the latest research and clinical evidence on peas. This group included David Perlmutter, MD; Frank Lipman MD; Dr. Michael Ruscio, Chris Kresser, L.Ac.; and Stephanie Greunke, Whole30’s in-house Registered Dietitian.

Stephanie says, “Pea protein is often used by functional medicine providers since it’s gentle even for sensitive patients, such as those with GI issues or a host of allergies/intolerances. Green peas generally don’t contribute to GI distress like other forms of legumes. Levels of antinutrients tend to be lower in peas than in other legumes, and cooked peas, how they’re often served, have lower levels than raw. I also don’t see issues with serving sizes around 1/2 cup even in sensitive populations.”

I’d also like to thank Mark Sisson, who spent one Sunday afternoon on the phone with me to talk this through. Mark has more experience than anyone in terms of clinical experience, watching millions of people adopt a Primal diet over the last decade-plus, and seeing how they react to certain foods like beans and peas, and he’s 100% in agreement with this decision.

More Variety in your “Veggies”

Our online resources have already been corrected, including our “Can I Have?” guide. Our Coaches and Whole30 Approved partners were advised well in advance of this announcement, to help us prepare for communications. Get ready to see Whole30 Approved labels on partner products like soups or frozen meals that contain peas! Our palate is expanding, which you and your kids might find exciting.

As always, thank you for your support. My team works hard to ensure the program is as effective as possible, while staying current on the latest science and clinical evidence. The rules aren’t always easy to set or maintain, but we’re convinced this small but important change is the right thing to do. Now pass the peas (and don’t forget the ghee)!