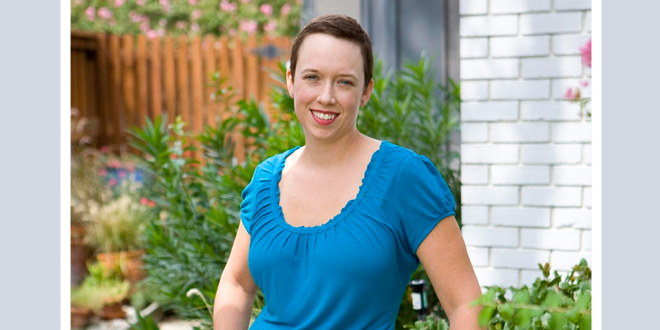 If you read one testimonial about the Whole30 program, please, read this story. Jessica moved us to tears when we met her at a recent workshop. Her story is powerful, and beautiful, and we are humbled by her kind words.

If you read one testimonial about the Whole30 program, please, read this story.  Jessica moved us to tears when we met her at a recent workshop.  Her story is powerful, and beautiful, and we are humbled by her kind words.  Read, believe, and share.

My horrible health nightmare begins in January 2010 when I awoke in the middle of the night feeling very sick, and then passed out and hit my head on my hardwood floor.  I was hospitalized, and over the course of about 8 months, I had a head CT scan, multiple brain, neck and back MRIs, three EEGs, a spinal tap, an EMG (where they stick needles in your muscles and make you flex to check to make sure your nerves are working, it’s how I envision prison camp torture), a cardiac stress test, probably 30 rounds of blood work and a lot of physical, mental and emotional suffering.

My doctors initially suspected: stroke, epilepsy, multiple sclerosis, Lyme disease, lupus, heavy metal toxicity and all kinds of other scary things.  Aside from a few lesions that were discovered on my brain MRI (that were later assumed to have been there since birth), all tests came back normal or insignificant.

During this time I was having paralyzing migraines, numbness in my arms and legs, dizziness, deep nerve pain in my left arm, chest pain and I developed sudden, intense muscle jerking on the left side of my body.  Sometimes the jerking would last for a few seconds and sometimes for several minutes at a time.

I knew I was sick.  I was very sick, and the sickness went on for months and months, but the doctors couldn’t help me and I was left feeling like I was making it all up.  The doctors kept asking me if this could be “stress,” but every time they said that I just wanted to jab a pencil in their eye.  I worked in commercial real estate, so I’d been stressed for years, but stress by itself doesn’t make your arms and legs go numb and make you black out and fall on the floor.

The mental torture was so bad that I quit my job and stayed home to care for my daughter (2 ½ at the time).  Being at home helped me to feel much better, but I knew whatever the problem was, it was not gone – it was dormant.  The jerking on my left side would come out every now and then, especially if I got stressed or nervous or anxious.  Occasionally my arm would jerk or my eyes would roll up or my hips would involuntarily move.  Thankfully, it wasn’t happening very often, but anytime it would happen, it would destroy me emotionally. It was just so discouraging.  It was like someone else was controlling my body and no one could explain why.

My doctors actually witnessed the jerking at a few different appointments, but it never registered on an EEG. My neurologists called it a “myoclonic jerk” or “myoclonic seizure.”  In the beginning, they offered to medicate me, but I refused since I hate medication and, at the time, it seemed manageable.

A New Struggle Sheds Some Light 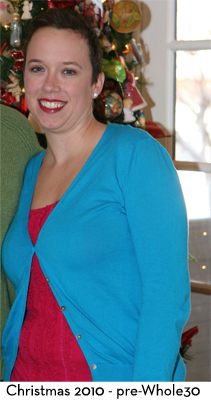 In the Fall of 2010, while I was home resting and trying to get well, we abruptly found out our daughter had signs of Autism Spectrum Disorder.  It rocked our world, but it meant I got to take a break from focusing on my own health issues and poured all my efforts into understanding and helping her.

Ironically, for a long time we’ve known our daughter has certain food sensitivities.  Gluten seems to upset her tummy.  Dairy goes right through her.  Too much sugar makes her impulsive, aggressive and uncooperative.  Fortunately, we discovered that if we keep her sugar, gluten and dairy to a minimum, she stays focused and her behavior stays in check.

In May 2011, I was feeling better and my daughter was making great improvements, so I decided to go back to work.  I started working at a local coffee shop and got stuck with the 5am shift.  As soon as I started the job, the myoclonic jerking started to come back on – strong.  It turned out the stress of learning a new job plus waking up at 4 AM plus drinking multiple shots of espresso will really bring out a seizure!  After just three months of working at the coffee shop, I decided to quit because of my condition.

Just over a month ago, someone sent me a link to an interview with a Russian neurologist, Dr. Natasha Campbell-McBride on Mercola.com.  She was talking about how neurological disorders like autism come from problems with bad intestinal gut flora.  She mentioned that when children with autism have bad gut flora, most of the time their mothers have bad gut flora as well.  And I realized . . .

I was investing all this time and effort and money into fixing my daughter’s diet, but never doing anything to fix my own.

A little over a month ago, I was at the park having a playdate with my friend, Rachel.  I told her how sick I was and how these seizures were unbearable.  I asked her to pray for me.  Then, just before we left, I asked her how I could pray for her.  She said that she was about to start this “cleanse” (the Whole30) and she could really use some prayer support too.  I thought that sounded interesting, but didn’t think much of it.  Still, I committed to pray for her.

In the meantime, I’m calling my insurance company trying to find out if they’re going to approve my upcoming EEG and trying to find out how much my out-of-pocket cost is going to be.  A few days go by.  I do a little more reading about this autism diet, and I really start thinking about this gut-brain connection, and then a light bulb goes off.  I realized I really needed to clean out MY gut . . . so I called Rachel and said, “Tell me about this ‘cleanse.’  What are you doing?”

Thankfully, Rachel was already 9 days ahead in her Whole30 and helped me get the jump start I needed to get going.  She gave me some ideas, inspiration and encouragement, and I quickly realized why she was asking for prayer.  This new way of eating was hard!

Within the first three to four days of my Whole30, I could tell my seizure symptoms were subsiding.  I tried not to get too excited, but I knew it was real.  I could just feel this horrible undercurrent of poison was being eradicated.  All of the anxious thoughts and feelings of stress that fueled my epileptic fire weren’t there anymore.

It’s crazy, but I didn’t know how sick I was until I started to get well.  I had cracked skin between my toes, dandruff, frequent breakouts and infected skin on my face, fingernails and toenails that wouldn’t grow and tore off like paper, unhealthy hair, swollen lymph nodes in my neck and armpits, not to mention my all my neurological problems.  Now, all of my skin is smooth and clear, and I finally have fingernails that are thick and healthy, and I feel like I have mentally clarity like I haven’t had in years.  It quickly became obvious the foods I was previously eating had been blocking my body from receiving the nutrients it needed to thrive.

Here’s the most amazing part.  After about a week of my Whole30 challenge, I noticed another real miracle taking place.  I suffer from a disorder called Trichotillomania, an impulse-control disorder that causes me to pull my hair out.  Some people pull out their eye lashes or their eye brows.  Some people pull other body hair.  I’ve pulled the hair from my scalp since I was 9 years old –  now, I’m 32.  That’s 23 years of shame, guilt, and covering up with no relief and no break.

After just about 6 or 7 days of following the Whole30 program, my urge to pull my hair out was COMPLETELY GONE.  This has never happened to me.  I’ve tried medication, psychotherapy, hypnosis, supplements and a list of other things to stop pulling in the past.  Everything has just been a temporary solution and I’m always left with a daily battle, fighting the urge to pull.  This time it quickly and quietly disappeared without a fight, and I’m convinced if I continue to be mindful of my diet, I will continue to be pull-free.

When I started my Whole30, I was missing nearly half the hair on my head.  Now, it’s finally filling in and growing back thicker than ever – and I’m so grateful. 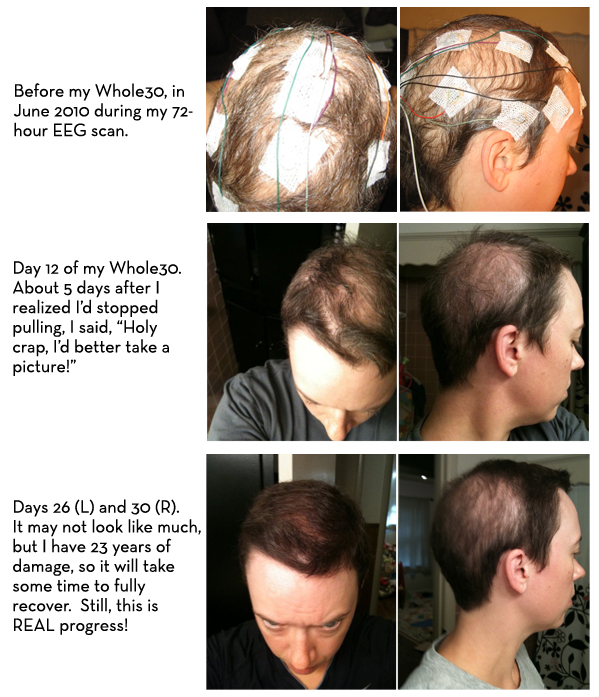 One Journey Concludes – Another Begins 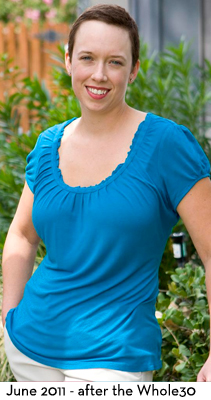 At this point, I’ve had so many medical tests that have come back “normal” that I may never have a scientific cause of all my illnesses, but it has become obvious that gluten, sugar and dairy do not agree with my body.  Just a few days ago, I just received some blood test results that indicate Celiac Disease is a possibility, and since my daughter and my mother have problems with gluten, it’s possible this could be a hereditary illness we never knew about.  I just never had digestive issues like my mother or daughter, so I never drew the connection.  (I’ve also had a SERIOUS lifetime addiction to pizza, pasta, cake and cookies, so I’ve been turning a blind eye for a long time!)

My doctors are aware of my dietary changes, and although they can’t yet explain what they’re seeing, they can’t argue with it either.  Clean blood.  Healthy weight loss.  Low blood pressure.   It’s good stuff.   I don’t see my neurologist again until November, but for now, all those expensive tests are on hold indefinitely.

I’m feeling better than I’ve felt in years, or maybe EVER, and I’m thanking God every morning when I wake up that my body doesn’t hurt and my head doesn’t feel dizzy and my blood doesn’t feel toxic… and I’m seizure free and pull free!!!!

Yes, the Whole30 helped me lose weight, and I’m getting my body back in shape (which, don’t get me wrong, has been totally freakin’ awesome too) but the REAL story here for me has been healing from the inside out.

From the bottom of my heart, thank you to the Whole30 team for all the work that you do.