If you’ve somehow made it this far in life without making loaded baked potato soup, this recipe for creamy Whole30 Loaded Baked Potato Soup is just for you. This warm soup has so many good things going for it. From the tender potatoes to the crispy bacon, and everything in between, you’ll enjoy every last delicious sip.

This soup has all of the flavors of baked potatoes in every bite and gets its creaminess from almond milk and a bit of canned coconut milk.  Serve this on a cool evening and enjoy a cozy night in knowing you’re feasting on a nourishing meal!
4.38 from 108 votes
Print Recipe Pin Recipe
Prep Time 10 mins
Cook Time 40 mins
Servings 4

Tried this recipe?Let us know how it was! 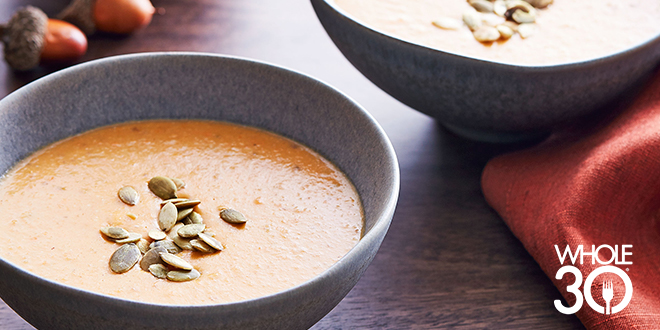 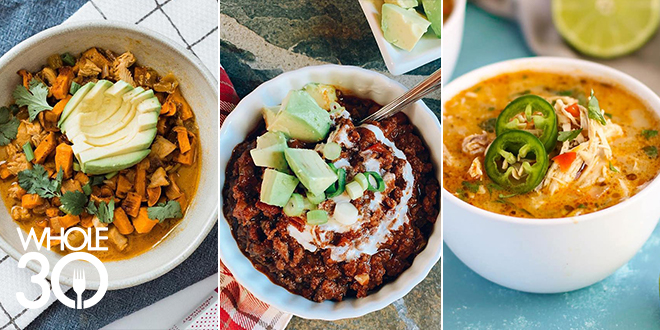 Recipes and photos by Sarah Steffens. Sarah has a B.A. in Business Administration, Public Relations from The Master’s College in Southern California.

After years of experimenting with nutrition and recipes in her own kitchen, she now works as a Personal Chef in Los Angeles, cooking meals that support her client’s intention to physically and mentally thrive. She has catered several independent film sets, making it her goal to optimize the energy and well-being of each creative crew. She is the in-house recipe creative for the Whole30, and the creator of the Savor and Fancy blog. When Sarah is not cooking Whole30 and Autoimmune Protocol meals, she is likely exploring mid-century sites in L.A., taking photographs, listening to an audiobook or hiking at Griffith Park.